ATV With Tracks Vs. Regular Snowmobile 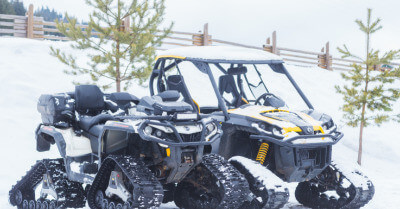 If you're looking for an in-depth comparison of ATV tracks vs. regular snowmobile, you've come to the right place. Let's compare and contrast the two!

All-Terrain Vehicles (ATVs) are named so for a reason. You can drive them on all terrains. Snowmobiles, however, are vehicles meant to be driven in the snow. You must consider factors like the type of terrain, vehicle's power, weather's severity, ease and comfort, and price before you choose.

Choosing between ATV tracks and a snowmobile can be quite a challenge for someone who likes to enjoy the adrenaline rush of cruising in the snow. Snowmobiles have been designed mainly to be driven in the snow. However, ATVs are made for harsher terrains and are absolutely suitable to be driven in the snow too. So, how can you decide what's the right vehicle to buy? Should you invest in an ATV track kit to convert your ATV or get your hands on a sturdy snowmobile instead? This blog post will provide you with all the answers you need.

Driving in the snow is no kids' game. It's risky and dangerous, but at the same time, it is truly exhilarating. If you ask us what we would suggest, our expert advice would be not to rush and consider all the right factors before you make up your mind about your choice of vehicle for driving in the snow.

An ATV is a 4-wheel drive that's suitable to be driven in all sorts of terrains – rocky, muddy, snowy – you name it. It is a sturdy and heavy vehicle mainly used by people who intend to enjoy off-roading adventures. As far as driving an ATV in the snow is concerned, you can't just get your ATV out of the garage and hit the snowy terrain – despite the fact that the vehicle is made for all terrains. You first need to install a track kit to convert your ATV into ATV tracks and then ride it in the snow.

Since ATVs are designed to suit even the toughest of terrains (not just snow), you'll have to make certain vital adjustments in your vehicle before you hit the snow. These adjustments primarily include installing tracks on your ATV so it becomes snow-ready!

As far as regular snowmobiles are concerned, you can tell by the name that their use is limited to snow and ice only. They are not meant to be driven on any other type of terrain. Snowmobiles are incredibly lightweight vehicles that are run on motors. Since you can drive snowmobiles on snow and ice, people who live in colder parts of the world use them for their day-to-day commute. Unlike ATVs, a snowmobile has two tracks in place of the front wheels that you can steer by steering the handlebar. The back wheels are replaced by a track that makes snowmobiles a killer option for people who enjoy going on adventures during the winter.

While there's no harm in using ATV tracks in the snow, it's best to rely on a snowmobile for your winter cruising adventures. As they say, an expert in the subject knows math best. In the same way, snowmobiles are the snow monsters made for snow and ice, so it is best to rely on them to ride through snowy terrains. ATVs have a set of limitations that make them second to snowmobiles.

As we said in the beginning, you should take your time to compare ATV tracks and snowmobiles in various aspects and then decide which one of the two seems like a more suitable option for you. We've compared the two vehicles in detail below:

Both snowmobiles and ATV tracks are powerful vehicles when it comes to power. However, their performance in the snow varies significantly. ATVs are one of the most potent vehicles, which is why they're the first choice for off-roading on harsh terrains. However, ATVs don't perform the best in thick snow. You can drive ATV’s with a track kit installed in the snow, but you should be prepared to experience a significant drop in speed. This is where snowmobiles have the edge over ATV tracks. Snowmobiles are meant to be driven in thick snow and hard ice. They have excellent maneuverability in snowy terrains, and you'll have complete control riding them.

ATVs are very heavy vehicles on their own, and when you install tracks, they become even heavier. On the other hand, snowmobiles are much lighter in weight. You may wonder what role the vehicle's weight plays in ATV tracks vs. regular snowmobile comparison. Well, the lighter the vehicle, the easier it will be to handle it in the snow.  Having said that, ATVs are difficult to handle in the snow as compared to snowmobiles.

ATV tracks beat regular snowmobiles when it comes to utility. The use of snowmobiles is limited to snow only. In warmer months, your snowmobile will probably just be sitting in your garage. However, ATVs can be used all year long. ATV tracks are basically regular ATVs that have been fitted with tracks, so when it's not snowing anymore, you can simply remove the tracks and use the ATV as you wish! ATV tracks offer more excellent utility and higher value for money.

One of the most important factors to consider when choosing between ATV tracks and regular snowmobiles is the types of terrain these vehicles are suitable for. As you can tell by the name, ATVs are suitable for nearly all types of terrains, including rugged, mountainous, sand-covered, slippery, deep water, and snow-covered terrains. You can use them for regular commute or for recreational purposes – however you please. ATVs are tough 4-wheel vehicles that have been made, keeping in mind difficult terrains where one cannot drive regular vehicles.

As for the snowmobiles, they're ideal for snowy and icy landscapes. Their design is specific to snow and ice too. With tracks in the front and tracks at the back, snowmobiles perform great in thick snow and hard ice. Their unique design enables you to maneuver across the snowy terrain effortlessly. There's no harm in driving an ATV tracks in snow, but snowmobiles offer greater control and better maneuverability, leading to better performance than ATV tracks.

Snowmobiles offer a higher level of comfort in the winters. They're equipped with heated grips and seats that keep you warm when you're riding in the snow. However, by default, ATVs don't have these features as they aren't designed especially for snow. You'll have to add heated grips yourself. If you want to make sure that you stay comfortable and protected from frostbite, we would suggest you choose a snowmobile or invest in high-quality heated grips for your TV tracks before hitting the snow.

Since snowmobiles are intended to be driven in the snow, they're made to be relatively stable in the snow. You don't have to worry about a snowmobile sliding, slipping, or tripping over. With ATV tracks, you've to make sure you're investing in tracks that have got large surface area. The larger the surface area of the tracks, the more stable the ATV tracks will be on snow.

Both ATVs and snowmobiles are on the pricier side. If you ask us which of the two is a cheaper option, we would say none of them is. If you want to invest in either of these two vehicles for recreational purposes only, you can always buy a used ATV or snowmobile. However, if you're planning to buy a used one, you'll have to take a thing or two into consideration.

Are you planning to ride in deep snow? If yes, you should consider investing in a snowmobile. However, if you're looking for an option that offers higher value for money, you should buy an ATV. You can use an ATV throughout the year. Simply add tracks during the winter to make it suitable for snow and store them away to use the ATV when it's not snowing.

Converting an ATV into an ATV tracks with Tracks

Adding tracks or a tracks system to an ATV might seem like all you need to do to get your ATV running in the snow. However, you'll have to make more than one modification to your ATV to make it suitable for snowy and icy terrains.

ATVs aren't designed for snow which is why you'll have to make some modifications. One of the biggest challenges you'll face when you convert your ATV into an ATV with tracks, for now, is getting the vehicle started. It'll be difficult to get the engine to start at extremely low temperatures.

If you don't want to invest in a regular snowmobile, continue reading ahead to know which modifications will make your ATV snow-ready in no time.

Getting the engine started is the only hurdle. Once it starts, the running engine will keep the vehicle warm and running. The following accessories will ensure that your ATV starts effortlessly even when the temperature drops low:

Other modifications that you'll have to make to convert your ATV into an ATV tracks include:

One thing in ATV tracks vs. regular snowmobile comparison is pretty clear – snowmobiles are a lot more convenient. Converting an ATV into a snow-friendly vehicle is a lot of work. However, what you prefer more – ease or utility – is on you.

Is Adding Tracks to ATV a Wise Thing to Do?

Adding tracks to your ATV is one of the best ways of making your ATV suitable for snowy and icy terrains. There's a massive variety of ATV tracks available on the market today for you to choose from.

Adding tracks to an ATV offers the following benefits: 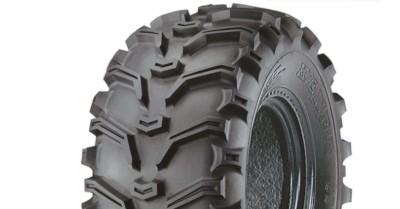 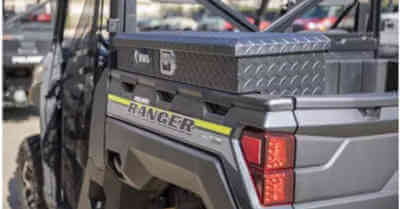 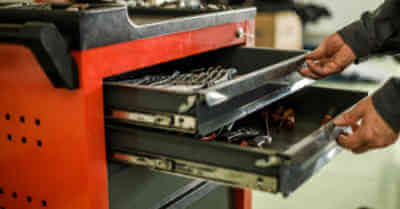 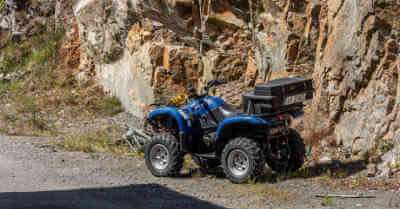 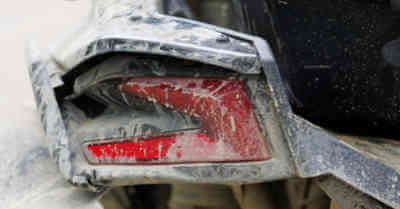 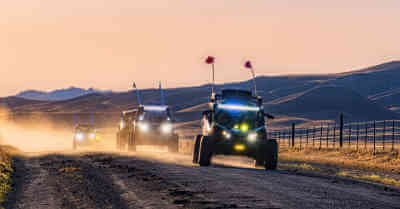 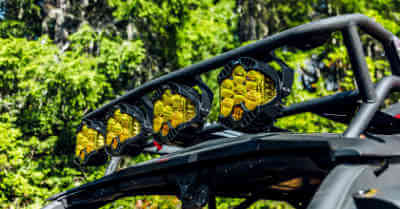 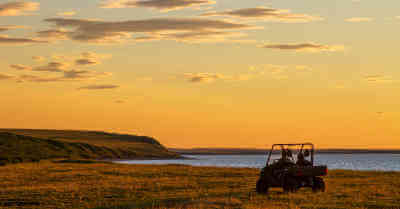