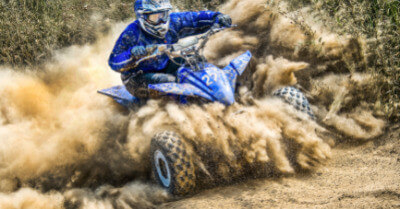 If you love to ride quads or dirtbikes, there is really no better way to get in the mood for your favorite trail than a great ATV/motocross movie.

The best ATV/Motocross movies are Butter: All Moto Flavored - a documentary featuring quads & dirtbikes, Supercross - a blockbuster action/adventure, Bennet’s War - a dramatic motocross story, and Huevos 10 - a documentary that focuses exclusively on ATVs.

Over the years, we have seen some incredible ATV & dirtbike motocross movies hit the silver screen. A lot of these movies feature some of the world’s most talented riders and can be a real source of inspiration for those of us that aspire to pursue motocross racing ourselves. However, on the other hand, there are a lot of Hollywood motocross movies that are less technical but are still a whole lot of fun to sit down and watch with a bowl of popcorn. No matter what kind of motocross movie suits your interests, you should not have a hard time finding a flick that gets you excited to go out on your next ride. To help you with this, we have handpicked some of the best ATV/Motocross movies out there.

After decades of working as an ATV/dirtbike mechanic and being an enthusiast of motocross racing films, I have spent an extensive amount of time watching movies that focus on quad and dirtbike racing. I’ve felt that the best ATV/Motocross films are those that have a great story but also those that have the most technical riding featured in them.

ATV/Motocross movies have been around for decades and they are as fun to watch now as they ever have been in the past. There is something magical about watching a vintage-era ATV/Motocross movie, as the sense of nostalgia that it gives you is priceless - especially if you have been riding for a while. The old-school motocross films are also a reminder of how far the sport and hobby have come over the years, as you can appreciate the performance and stylistic designs of old model rides.

With that being said, motocross has come a long way and when you watch a new movie that features these awesome machines, you know that they are going to showcase the best of the best - top riders, top quads/dirtbikes, and the camera technology to make it all look absolutely incredible.

Filming motocross has never looked better - with 4k quality cinematography, epic drone footage, and riders being able to wear action cameras while they are out on the track, we can really get a glimpse of what this sport looks like from every angle imaginable.

So, if you are looking for a sense of inspiration to one day become a motocross racer or if you simply just love watching the best riders in the world shred the most intense trails imaginable, having a great motocross film at the top of your movie list is going to be a must. Let’s dive into the best ATV/Motocross movies.

When it comes to legendary ATV/Motocross movies, Butter: All Moto Flavored is going to be a top pick for so many riders and fans out there. This is a film that truly has nothing but integrity for the sport of riding quads and dirtbikes, as the creators worked together with some of the best riders in the world on this project.

Butter: All Moto Flavored was originally released back in 2013 and it became an instant sensation for the riding community of both quads and dirtbikes. The movie was directed by Derek Guetter and it is a 50-minute action-packed thrill ride of nothing but mud, dirt, and tires.

From practically the minute the movie starts, you will see the intense sport of motocross in action. What makes Butter: All Moto Flavored such a great film is how dynamic the riding is. Most motocross movies tend to focus on dirtbikes or quads exclusively. Whereas Butter: All Moto Flavored gives the center stage to both quads and dirtbikes, which has made it a crowd-pleaser, to say the least.

The organizers of Butter: All Moto Flavored worked with their riders to create the most epic film possible, which is why they made a custom track that is meant to push the boundary of the sport to its limits and get the audience’s adrenaline pumping as much as the riders’.

Some of the top cast of Butter: All Moto Flavored features actors like Jeremy Stenberg, Colten Moore, and Mike Mason who are all experienced riders that are highly praised by the world of motocross racing, so you know you are in for the best of what the sport can offer.

If you were watching motocross racing movies in the 2000s, then the movie Supercross probably caught your eye. However, if you happened to miss this Hollywood blockbuster, you are in for a treat.

Supercross is a movie that is filled with action, drama, and intense dirtbike racing. The story follows two brothers, K.C. and Trip Carlyle who are both avid motocross racers who happen to also be each other’s arch-nemesis on the race track.

After some opening intense dirtbike races that are total thrill riders, we watch K.C. get offered a groundbreaking sponsorship to boost his career. This ends up being a total blow to Trip Carlyle as K.C. has essentially left his brother eating his dust. The story then shifts when K.C. gets into a serious accident in a race, which results in his inability to ride.

While this seems like the end of K.C.’s career, it ends up actually being a catalyst for the two brothers to reunite, find common ground, and begin pursuing their passion for riding as a team. This is a motocross movie that is as much about the journey of two brothers on the track as it is about the sport of dirtbike racing.

With that being said, that is not to say that you will not have some incredible riding happening consistently throughout the movie. Supercross features some world-class riders in it and we can watch them tear through track after track as the movie unfolds.

Director Steve Boyum and lead actors Steve Howey and Mike Vogel do not disappoint with this motocross classic from 2005.

When it comes to motocross racing legends, everyone loves a good success story, but what is somehow even more rewarding to witness is someone’s comeback story. Bennet’s War does just that as we watch a competitive rider struggle to make his way as a motocross racer and overcome the challenges that the sport and the lifestyle bring.

This 2019 motocross movie follows the story of Bennet who is an ex-motocross racer who became a soldier. Bennett is wounded during the war and suffers near-fatal injuries that leave him almost disabled for life.

Bennet is determined to get back to riding but is faced with constant real-life obstacles that make his journey back into motocross a constant challenge. His condition is uncertain as he is still overcoming some of his injuries from the war, which makes his family worried about his health and the potential harm that can happen to him by continuing racing.

On top of that, Bennet is struggling with his finances and is being hit from each angle with bills and mortgage payments. Without giving too much away this is a motocross drama that will hit home with so many riders, as these are the challenges that so many of us have to face when wanting to become pros on the track.

The director, Alex Ranarivelo, made a movie that is engaging, dramatic, and of course - features a ton of epic riding.

If you are the type of person that exclusively loves riding quads, a dirtbike motocross film will certainly be engaging and a lot of fun to watch, but it just won’t get you as excited as a movie that focuses exclusively on ATVs. Huevos 10 does just that!

This film is a non-stop thrill ride of quads doing jawdropping stunts. We watch ATV riders attempting some of the most challenging and dangerous jumps ever ridden on a quad, which will likely get you biting your nails.

Having been filmed in 2007 this is a movie that has been widely praised by the ATV/Motocross community for nearly 15 years as being one of the best ever made - and dedicated just to ATVs.

You follow a team of riders on their journey as they take you to some of the most epic riding spots around the world - many of which have never been ridden before. You will witness insane jumps that ended up breaking world records.

Wes Miller directed and produced this film and he is held in high regard by the ATV/Motocross community for delivering a masterpiece to riders around the globe. If the praise from the riding community is not enough to convince you, perhaps its 9.6 IMDB rating will do the trick. If you love riding ATVs, Huevos 10 is a movie that you simply must watch.